Released by the David Suzuki Foundation and Council of Canadians, and with advisers Human Rights Watch and Amnesty International, the report assesses the federal government’s progress in nine First Nations across Ontario. With 81 active DWAs — more than any other province — Ontario provides a snapshot of Canada’s First Nations water crisis.

“We are calling on the government to work with First Nations to make necessary changes to the way it addresses the lack of safe drinking water in First Nation communities,” said David Suzuki Foundation Ontario science projects manager Rachel Plotkin. “At present, it is not on track to meet its promise.” END_OF_DOCUMENT_TOKEN_TO_BE_REPLACED

“Now we have scientists opening our doors of perception about trees…”

Although the sophistication of tree intelligence may stress some people’s credibility, Dr. Suzanne Simard — who has documented it with rigorous scientific protocols — contends it is an established fact.

Peter Wohlleben has done the same. By examining the metabolism of trees over time, he has found that trees in a beech forest synchronize their photosynthesis so that each grows “into the best tree it can be.” This is not competition but a system of “mutual support”. Indeed, a forest is a community that functions for the betterment of all its members.

Wohlleben, in his more poetic description of trees, notes that they have “individual characters”. Some, which he describes as having more “anxiety” than others, will drop their leaves early to avoid the damage of autumn storms. Others are riskier, willing to take the chance for a little extra growth. Some are more gregarious than others, doing more communicating and trading — cedars, apparently, tend to be loners.

We, of course, would attribute this tree behaviour to genetics. But couldn’t we say the same about the character of any human being? Children clearly have innate personalities, pre-packaged in their genetic structure. They grow up expressing these qualities. Why would we expect a tree to be any different? END_OF_DOCUMENT_TOKEN_TO_BE_REPLACED

Suzanne Simard, a forest ecologist from UBC, has been studying the intelligence of trees for about 25 years. When you walk in a forest, she says, you see trees, but “underground there is… a world of infinite biological pathways that connect trees and allow them to communicate, and allow the forest to behave as if it’s a single organism. It might remind you of a sort of intelligence.”

Simard has documented this intelligence using tracer isotopes such as carbon-13, to show how “birches and Douglas fir supply each other with carbon and nutrients, while taking turns as the dominant partner in the exchange” (Maclean’s, Sept. 19/16). This interdependence is often so strong that felling one tree can cause the other to die.

Such interdependence is even interspecies. The mycorrhizal networks that form the living body of fungi — their fruiting bodies are mushrooms — have no photosynthesis to produce the sugars they need, so they get this essential nutrition from trees in exchange for elements such as nitrogen, phosphorus and carbon. “The connection runs so deep that from 20–80% of the tree’s sugars can be transferred to the fungi, while the transfer of nitrogen to trees is such that without the swap, trees would be toy-sized” (NewStatesman, Oct 26/16). END_OF_DOCUMENT_TOKEN_TO_BE_REPLACED

Painting by Emily Carr, one of the Canadian Seven. Photo courtesy of WikiArt..

A different scale of time accounts for one of the reasons we have difficulty understanding the intelligence of trees. We interpret events with reference to our human sense of normal. Comparatively, trees seem to respond slowly, their life cycles sometimes approaching millennia — in the words of the German forester, Peter Wohlleben, they “exceed the human attention span.” They feed on the raw material we call dirt and produce their energy by the perplexing process of photosynthesis. As very different creatures, it’s not surprising we haven’t been able to understand them.

Because trees are “rooted” in one place, they have devised and used their own ways to relate and communicate with their surroundings —ways that happen to be outside the range of our usual perception. And why should they behave as we do? This expectation is one of our major shortcomings. Children, with their special innocent wisdom, recognize and accept trees as living beings with purposeful and deliberate behaviour, and so do Peter Wohlleben and Suzanne Simard. END_OF_DOCUMENT_TOKEN_TO_BE_REPLACED 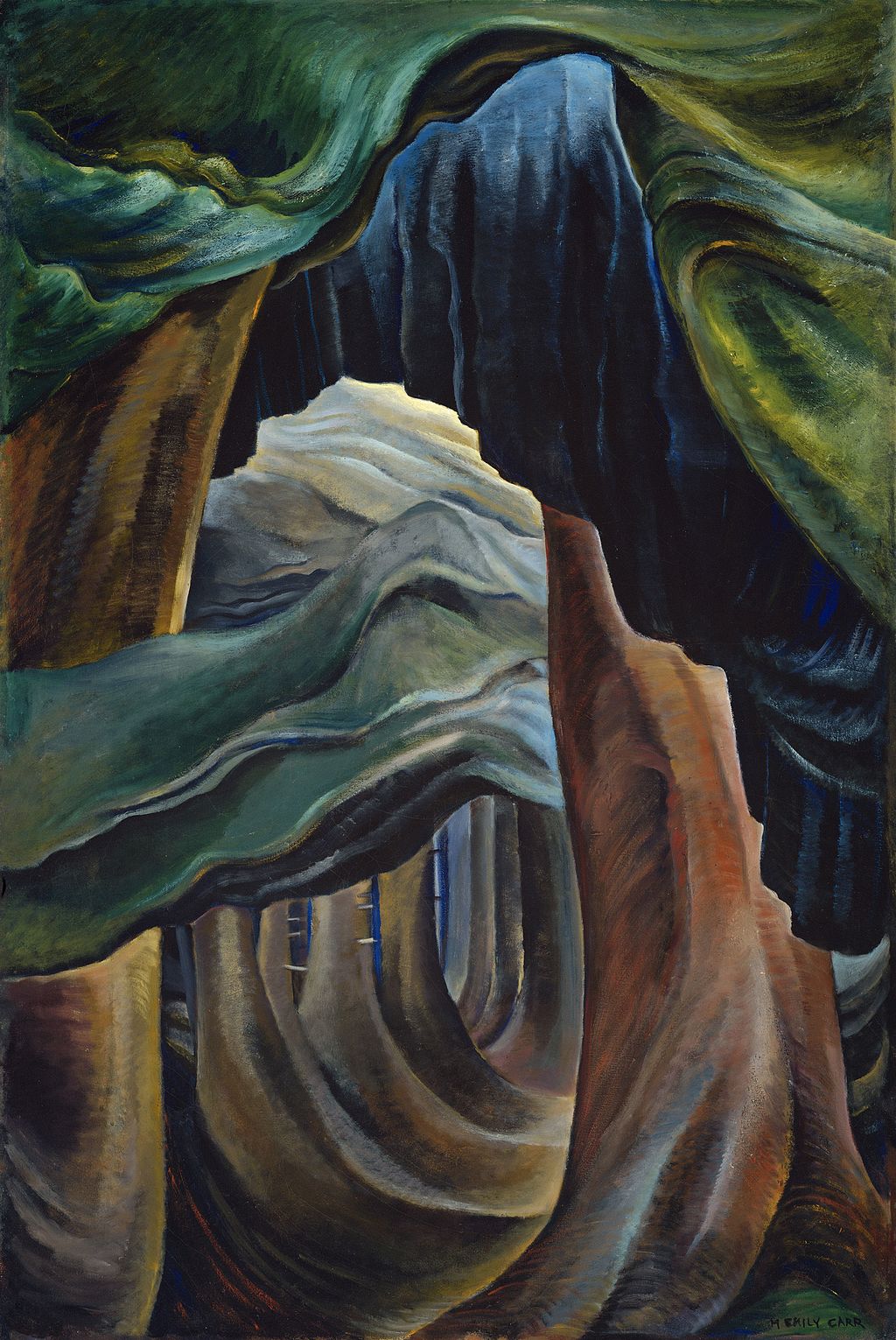 Some discoveries are revolutionary and so obvious that we’re surprised we didn’t know about them earlier. The new perspective they provide begins to work its magic by shifting our awareness and values. And we can never again return to our old way of understanding the world.

This has been happening with increasing frequency, particularly in biology. At the very time when we are losing species and destroying ecologies with a prodigious efficiency, we are also gleaning remarkable insights about the astounding ingenuity and complexity of life. The discoveries of a German forester, Peter Wohlleben, and a UBC forest ecologist, Dr. Suzanne Simard, are a striking example.

If living cooperatively in communities, rather than living competitively as individuals, has made more evolutionary sense for humans, why shouldn’t the same principle be used by trees? Indeed, as complex biological organisms, trees have existed hundreds of times longer than we have. If cooperation has been beneficial for us, why would we think that trees should be exceptions? END_OF_DOCUMENT_TOKEN_TO_BE_REPLACED

The American voters understood the question, they just didn’t like their choice of answers. Neither of the two presidential candidates, Hillary Clinton nor Donald Trump, represented the change they wanted and needed.

Their disquietude is justified. To the growing vertical division between right and left has been added the horizontal division between rich and poor. This is creating a palpable social tension. The increasing dominance of the corporate agenda is too often contrary to the public interest. The uncontrolled flow of money into politics has adulterated the democratic process. Irritants such as racial tension, changing demographics, foreign policy miscalculations, trade deficits, energy transition and weather extremes have all contributed to their demoralization.

Donald Trump is an outlier in almost every respect. But, at least, he is change. He has never held political office, he doesn’t belong to the Republican establishment, he is an individualist who offends, provokes, polarizes, bullies, and seems to possess a logic that defies reality. This is the risk Americans have decided to take. Unfortunately, these are the risks that also must be shared by the rest of the world. END_OF_DOCUMENT_TOKEN_TO_BE_REPLACED

Today in Montreal, David Suzuki will announce the second phase of the Blue Dot movement.

“In two short years, more than 100,000 people have joined the Blue Dot movement for environmental rights, and 145 cities and towns have recognized these rights at the local level,” Suzuki said. “We’ve reached a critical mass and are now turning to the next phase of this campaign — a federal environmental bill of rights.”

Suzuki and a panel of experts will be joined online and in person for a national town hall to plan this next phase of the campaign. It seeks the legal recognition of the right to a healthy environment — including the right to clean air and water, safe food and a stable climate — for everyone in Canada. This is a major step towards the campaign’s ultimate objective of enshrining environmental rights in our Constitution, something already enjoyed by 110 countries worldwide, but not Canada.

“Donald Trump’s recent victory in the United States demonstrates the importance of guaranteeing rights to environmental protection,” Suzuki said. “Issues as important as clean air and water should not be left at the mercy of political cycles.” END_OF_DOCUMENT_TOKEN_TO_BE_REPLACED

The political idealists who believed that the new Liberal government under the leadership of Justin Trudeau would keep its promise to cut greenhouse gases were dismayed by its decision to approve the Petronas Pacific Northwest LNG plant on Lelu Island near Prince Rupert. Not only did the decision seem to ignore regional concerns about the safety of Skeena River salmon, but it committed an additional 4.3 million tonnes of annual of carbon dioxide emissions. This would be a serious handicap to Canada’s pledged reduction targets, and would make BC’s targets virtually impossible to meet.

Either the government has seriously compromised its principles or a cunning method lurks in its madness. Consider the situation.

Trudeau’s Liberal government has announced that Canada will have a $10 per tonne carbon tax (or equivalent) starting in 2018, rising in equal annual increments to $50 per tonne by 2022. Some of the provinces were shocked and promised to resist. To get the support of a reluctant BC government, the Petronas project for some $31 billion was approved with 190 conditions.

But this doesn’t guarantee the project will be built. LNG prices are currently low, other LNG supplies are being added to an already competitive global market, renewable energy production is surging — 2015 was its best year ever — and Petronas, the project’s major investor, has delayed its decision to build because of economic uncertainties. END_OF_DOCUMENT_TOKEN_TO_BE_REPLACED

We are living in a time like no other in human history. The environmental decisions we make today and in the next few years will determine our planet’s climate stability and the direction of human destiny for centuries to come.

Perhaps everyone alive at any given moment in the past has thought that they were living at the centre of history. This is not quite true. History changes in irregular pulses, something we know in retrospect by analyzing the unfolding events over centuries and millennia.

Today, we live in a pulse of extraordinary intensity. The rate of change — demographically, technologically, culturally, environmentally — is so fast that yesterday almost seems historical. Consequently, each moment becomes pivotal, each decision significant, and each act of amplified importance. END_OF_DOCUMENT_TOKEN_TO_BE_REPLACED

In August, the Musgamagw Dzawada’enuxw First Nations gave eviction notices to salmon farms operating illegally on their territory. In response, Marine Harvest Canada has recently filed a lawsuit, prosecuting them for obstructing their [illegal] aquaculture sites, Photo by Tide of Change.

On September 23, 2016, Marine Harvest Canada Inc. filed a “Notice of Civil Claim” for trespass against “Alexandra Morton, John Doe, Jane Doe and all other persons unknown to the plaintiff occupying, obstructing, blocking, or physically impeding the plaintiff’s aquaculture sites.”

This action is unlikely to win public support for a salmon farming industry already with a tattered reputation. And it may raise legal complications that will test the wisdom of the court.

This is the first time Marine Harvest has sued Morton for anything she has previously said or done. One possible explanation for this legal action is that her “Operation Virus Hunter” aboard the Sea Shepherd’s RV Martin Sheen this summer may actually be harming the industry. Corporations only trouble themselves with individuals when they’re feeling threatened. END_OF_DOCUMENT_TOKEN_TO_BE_REPLACED